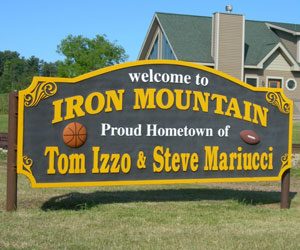 Iron Mountain, Michigan is the county seat of Dickinson County and was named for the valuable iron ore found in the vicinity. Iron Mountain is home to the Millie Hill bat cave, the Cornish Pump, and Pine Mountain Ski Resort, containing one of the largest ski jumps in the world. The resort hosts the annual FIS Ski Jumping Continental Cup, which has attracted some of the world’s top ski jumpers. In addition, Iron Mountain is known for its pasties, bocce ball tournaments, and Italian cuisine. Population was 7,518 in the 2020 census. Learn more here.