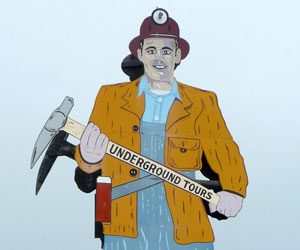 Norway, Michigan is 6 miles west of Iron Mountain and is home to the Norway Speedway, a 1/3-mile paved ASA member track, and the Dickinson County Fairgrounds. A major attraction is the Class IV Piers Gorge on the Menominee River, with whitewater rapids and waterfalls. Population was 2,845 at the 2010 census. Learn more here.
Vulcan, Michigan sits 3 miles east of Norway and was named after Vulcan, ancient Roman god of fire. It is home to the Iron Mountain Iron Mine, which gives guided underground tours to show early mining methods and interesting rock and ore formations judged to be millions of years old. Population was 1,489 at the 2010 census. Learn more here.